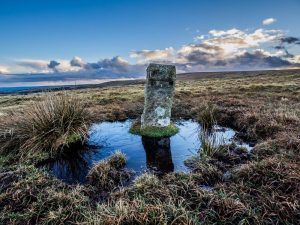 Notes: These 52 Water Works Boundary Marker Stones are inscribed PUDC on one side and RD/H on the other. PUDC stands for 'Paignton Urban District Council' and RD/H stands for 'Richard Dawson, Holne', from whom Paignton Water Works purchased 700 acres of Holne Moor, paying £11 per acre. The reservoir was constructed in 1907 to supply water to the Paignton areas. The Engineer was Fred William Vanstone and the Contractors were Hawking & Best, Teignmouth. The Reservoir was opened by F. Layland-Barratt Esq. M.P. on June 26th 1907. It was a Wednesday. The stones face in accordance with which side is PUDC or RD/H land. The inscription always faces the owned land side. There are three 'corner' stones (Nos. 07, 22 and 43) where the direction of line changes and the corner stones appear to be turned 90 degrees from the stones either side of them to indicate this. PUDC stones Nos. 07 and 43 were used by Ordnance Survey to place Bench Marks. Dave Brewer suggested that the stones were placed 'at fairly regular intervals of about 200 yards' apart. However, there are a number of locations in the 'loop' where that is clearly not the case. There is a long gap between stones Nos.22 and 23. It has been conjectured that there might be a missing stone here. Several stones have been 'paired-up', sometimes the reason is clear (where the line of stones crosses a road i.e. Nos. 3 & 4 and Nos. 45 & 46 - to create 'Gateway Stones') but in other locations (such as Nos. 26 & 27) the reason is not so clear. For 26 & 27 the pairing does have a 'track' cutting between them, but they are quite staggered - much more than the Road 'Gateways'. It would be interesting to visit the Paignton Old Records Dept. to see what further information could be gleaned! Reference: Many thanks to Dave Hamnett for providing the original 10 figure GPS National Grid References for all of these items. Further information from Dave Brewer (2002), Dartmoor Boundary Markers, Halsgrove, pg.288 and DartmoorCAM. Steve Mason (of Dartmoor News) also offered some knowledge and assistance. Many thanks to 'Mini-Dad' (see No.20!!) for his assistance out in the rain and snow!