Dartmoor Square Bagging on Dartefacts (invented by Peter & Karin Brooks) is really an entirely separate ‘bagging’ activity to dartefact bagging. However, it was soon realised that with Square Bagging we had invented an incredibly efficient method of ‘finding’ items (both squares and dartefacts) on the Dartefacts Maps. So now Square Bagging has become integral to the entire ‘user experience’ on this website.

How do you ‘bag’ a square area?? There is no hard and fast rule as to how you can claim you have ‘bagged’ a square, how you play this game is really up to you. But here are a few possibilities..

Option 1: The Walk Through: Personally I would say a square to be bagged when it has been walked through – i.e. you travel either North to South, East to West, North East to South West etc. – you exit a side of the square opposite the one you entered. I don’t think you have to reach or touch the centre (or perhaps you do?)!

Option 2: Visit the Square’s Key Dartefacts: Another possible way of considering a square ‘bagged’ is when you visit the ‘Key Dartefact(s)‘ of that square. This would usually be a Dartefact of particular ‘importance’. For example Square SX 74 80 (Square No. 0857) contains Bowerman’s Nose 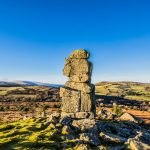 (which is also the 365 item, J17) and so even though it’s right at the western edge of that square, as it’s the major item in that square a visit to Bowerman’s Nose would, I reckon, constitute the bagging of SX 74 80 (Square No. 0857). As we develop Square Bagging we will make clear the ‘Key Dartefact(s)’ of each square.

Option 3: Visit the Centre Point: Another ‘bagging technique’ that I think is particularly valid in the empty north moors is to visit the exact centre of the square.

But, at the end of the day how you play this game is entirely up to you.

Some squares, especially around the edges of the National Park Boundary are entirely on private land and in that instance access must be sought from the landowner before visiting. Do not assume that a listed item is legally accessible. No responsibility for trespass, injury or damage to property etc. can be attributed to this project. 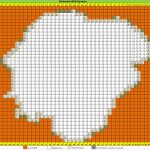 The above downloadable item is an Excel Document kindly supplied by Peter Brooks. It allows the squares to be ‘ticked-off’ (by adding a

1 into the square bagged). This is a brilliant way of keeping track of your bagged squares – especially when planning that next Dartmoor adventure!

Square Bagging Acknowledgements: Peter and Karin Brooks (who have previously supplied images and data to the Dartefacts site) had started ‘Square Bagging’ and suggested to me that it would be great to have that feature on Dartefacts. I thought it was a brilliant idea and so here it is! Peter has also provided many suggestions for this new feature as well as using his considerable Excel Spreadsheet etc. skills to make this all possible. I owe a huge thanks to both Peter and Karin.

I also owe a huge thanks to Simon Battersby of Simon Battersby Consulting Ltd for all his hard work in realising the technology behind the ‘Square Bagging’ idea. If you need a website I can thoroughly recommend Simon.